We care about your well being and know that you may need electrical work during this unprecedented time in our lives.
COMING SOON 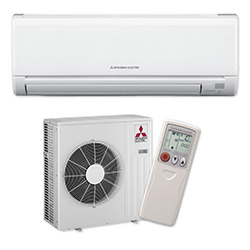 The most common type of central cooling system is a split system. It includes an outdoor unit that houses the condenser and compressor and typically sits on a concrete slab outside your home. The indoor unit contains the evaporator and is usually located either in the attic or in a closet.

Central air conditioning is often connected to a central heating system because they share the same ductwork for distributing conditioned air throughout your home.

A unit that has multiple indoor units that use a single compressor is known as a multi-split air conditioning system.

A packaged air conditioner is used if you want to cool more than two rooms or a larger space at your home or office. There are two possible arrangements with the package unit. In the first one, all the components, namely the compressor, condenser (which can be air cooled or water cooled), expansion valve and evaporator are housed in a single box. The cooled air is thrown by the high capacity blower, and it flows through the ducts laid through various rooms. In the second arrangement, the compressor and condenser are housed in one casing. The compressed gas passes through individual units, comprised of the expansion valve and cooling coil, located in various rooms.

A ductless cooling and heating system is comprised of a small outdoor unit and one or more indoor units that require nothing more than mounting capabilities and access to electricity. They’re installed high on walls in homes, restaurants and office buildings. One of the main reasons why homeowners switch to ductless cooling and heating is the overall cost savings. Ductless systems operate on less power and they are smaller than traditional forced-air systems. Because the temperature-controlled air is delivered directly into a room, there is no loss in efficiency. Multi-split systems also allow homeowners to create “zones” in their home, which means they no longer have to cool or heat rooms that aren’t occupied.

The difference between ductless air conditioning systems versus a ducted system is that a ductless system (often known as a ductless mini-split) doesn’t use ducts in the walls to distribute air. Instead of cooling air with one central indoor air handler and blowing it through ducts, the ductless air conditioning system sends refrigerant directly to multiple small air handlers (also called blowers) that are installed throughout your residence. These air handlers remove heat from each room individually. They look like small boxes installed on the wall or the ceiling of each room.

You should choose a ducted air-conditioning system if your house already has ductwork installed and in good condition. Installation is simply a matter of hooking up the new unit to the existing ventilation. It’s quicker and less expensive. A ducted system is better at controlling humidity. The air handlers in ductless air conditioning lack the mechanisms needed to remove much moisture from the air and drain it away. Ducted systems also provide better air circulation. Since ductless air conditioning systems cool the air in each room individually, there is less air movement throughout the space, sometimes leading to stagnant air and air pressure issues.

In addition to saving money on utilities, homeowners may also be eligible for tax credits or utility rebates for the year they install a ductless system. There are many programs at the federal, state and local level that allow homeowners and businesses to take advantage of these additional savings.