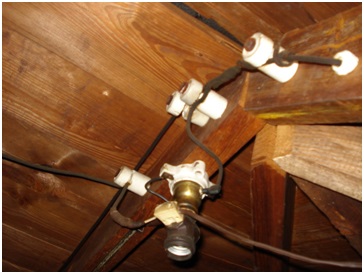 If your home was built before 1950, chances are good that it probably has knob and tube wiring.

This type of wiring uses porcelain insulators (knobs) to run the wiring through unobstructed areas. Porcelain tubes protect the wires that ran through the studs and joists.

The problems with this type of wiring include a lack of a ground conductor. In other words, the electricity isn’t grounded so it doesn’t cross earth ground until passing through an item using electrical power such as a light appliance, etc. Anything touching it could be used as a passageway to the return path, including yourself.

Another problem is that the circuit can be turned off but the electrical current is still live. Switches are often placed on the neutral wire, which turns off the circuit, but not the current.

Other issues occur when new circuits are added to the original wiring. By doing this, the fuses protecting the old circuits are more likely to blow due to the added electrical demand.

Other safety issues are that heat above ceiling fixtures and in un-vented attics degrade the rubber or cloth insulation. Rodents that find their way into the older homes sometimes eat the insulation, thus leaving the wires unprotected.

Some insurance companies demand higher premiums from customers with knob and tube wiring in their homes, while other companies refuse to insure homeowners at all until the wiring is changed.

If you still have knob and tube wiring in your home, it would be a good idea to have us take a look at it to determine whether it’s degraded to the point where it’s become a safety issue and should be replaced with aluminum wiring which meets the current national electrical code.

Don’t risk the safety of your home and family if your house still has knob and tube wiring.