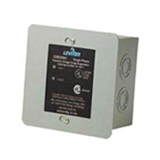 The need for surge protection or suppression has increased dramatically. This is because many electronic devices can be damaged by power surges. Electronic devices which are sensitive to power surges include security systems, computers, printers, fax machines, telephones, small appliances, microwave ovens, refrigerators, stereos, garage door openers, and low-voltage lighting systems.

A power strip won’t protect your electronic devices or appliances when a power surge or outage occurs. Even though a power surge may last for only a few millionth of a second, it carries tens of thousands of volts which are enough to fry circuit boards, crash hard drives, ruin home entertainment systems and fry anything that has the word “smart” in it’s description.

Most common causes of power surges are downed power lines, the on and off cycling of printers, electric hair dryers, air conditioners, refrigerators, and other energy-using devices in your home.

In order to protect your home against power surges you need a whole house suppressor to handle the large power spikes and an individual plug-in surge suppressor for appliances and electronic devices. Both of these act like pressure relief valves. They normally allow current to flow through them. When a higher than normal voltage hits them, these devices instantly divert the excess voltage to the ground wire. As soon as the voltage levels return to normal, the normal flow of electricity is restored.

Whole house surge protectors are hard wired to the main panel. However, they can’t stop surges completely. That’s where the plug-in surge protectors step in. They’re the buffer between individual appliances and wall outlets.