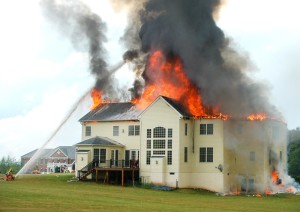 You may have seen the television reports or read the heartbreaking story about the 73 year old Natick woman who died in a house fire on February 20th, 2016:

The report stated, “Fire Marshall Peter J. Ostroskey said investigators determined there were two smoke alarms in the home, one without a battery and one with a dead battery.” He went on to say that “thirteen people have died this year in fires – nine of them in homes without working smoke alarms.”

If you have non-working smoke alarms/detectors in your home, you need to make sure that they’re working properly so that you don’t become the next casualty.

Flames can consume a home in as little as five minutes. Smoke detectors save lives.

The two primary types of smokes detectors are ionization and photoelectric.

How they work: Ionization-type smoke alarms have a small amount of radioactive material between two electrically charged plates, which ionizes the air and causes current to flow between the plates. When smoke enters the chamber, it disrupts the flow of ions, thus reducing the flow of current and activating the alarm

Photoelectric smoke alarms are generally more responsive to fires that begin with a long period of smoldering (called “smoldering fires”).

How they work: Photoelectric-type alarms aim a light source into a sensing chamber at an angle away from the sensor. Smoke enters the chamber, reflecting light onto the light sensor; triggering the alarm.

For each type of smoke alarm, the advantage it provides may be critical to life safety in some fire situations. Home fatal fires, day or night, include a large number of smoldering fires and a large number of flaming fires. You cannot predict the type of fire you may have in your home or when it will occur. Any smoke alarm technology, to be acceptable, must perform acceptably for both types of fires in order to provide early warning of fire at all times of the day or night and whether you are asleep or awake.”

Knowing the type of smoke alarm you have is clearly an important part of fire safety, but experts also warn that, regardless of type, smoke alarms won’t protect you if they’re not working properly.

According to NFPA, “Three of every five home fire deaths resulted from fires in homes with no smoke alarms, or no working smoke alarms.”

Start by making sure you have the right number of smoke alarms in the right places. The recommendation is to have a smoke detector installed on the ceiling in every bedroom, outside each separate sleeping area and on every level of your home, including the basement.

Then, set reminders to change the batteries on each unit at least once a year, and to test the units monthly, regardless of whether they’re battery operated or hard wired.

We can inspect your existing smoke detectors and/or install new ones to ensure that they’re working properly in the event of a fire.

Call WattsControl, Inc. at 508-309-6631 if you require assistance with your smoke detectors or for any other electrical needs.