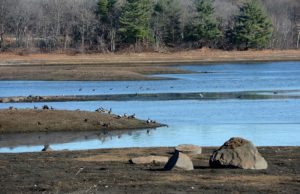 Water. We hardly ever think about it. We turn on the faucet and water pours out of it. What if that didn’t happen? What if water was rationed and every person and animal were allocated a certain amount of water per day? That wouldn’t be a pleasant situation. To insure that such a scenario doesn’t occur, we all have to work together to limit our water consumption.

On Wednesday, August 17th, the Massachusetts Department of Agricultural Resources announced it was partnering with the Massachusetts Emergency Management Agency to provide emergency water trucks to farms in need of water to care for livestock and remaining crops.

In a MetroWest Daily News article from August 18th, “According to Ed Coletta, spokesman for the Massachusetts Department of Environmental Protection, 159 water supply systems in the state have implemented mandatory or voluntary water restrictions. There are 67 communities with the highest level of water restrictions in place, including Ashland, Bellingham, Franklin, Holliston, Hopedale, Hopkinton, Milford, Natick, Sudbury and Westborough. On Wednesday, Wayland increased its water restriction to ban sprinkler use.

We continue to urge all water suppliers to implement any kind of conversation measures they can,” Coletta said.”

On Thursday, August 18th, Massachusetts Governor Charlie Baker held a news conference in North Andover to discuss the drought. He has asked residents to step up water conservation efforts after five months of abnormally dry conditions. Northeastern Massachusetts has extreme drought conditions, which is the fourth out of five measured drought levels.

Seventeen percent of Massachusetts is facing its worst drought in more than a decade and these extreme conditions have damaged the state’s agriculture and overall economy. Governor Baker said that he would apply for federal aid if crop losses reach 30 percent. He also stated the state was making preparations, if necessary, to set up emergency piping between communities with plenty of water to those running low and the national Guard might be called upon to use tanker trucks to ship water to drought affected towns.

Farms do not have the water they need in order to grow their crops and water their livestock. Livestock such as cattle and horses may not enough hay to eat this winter because of the lack of rain needed to grow the hay.

At Smolak Farms in North Andover, corn crops have been ravaged and newly planted Christmas trees, which were intended to be sold after a few years of growth, have died. “This is the worst in my lifetime,” said Michael Smolak, who owns the farm. “It’s past the point of return for many crops.”

Everyone should think about how they can limit their water use. Here are some suggestions:

Turning off water when you brush your teeth, wash your face or shave can save more than 100 gallons of water a month.

If you have a leaky faucet, fix it. The drip can add up to 300 gallons of wasted water a month.

If you use a dehumidifier, water your flowers or vegetables with the collected water.

In addition to taking shorter showers, lower the pressure of your showerhead to half. You’ll still get the soap off and you’ll also cut your water usage in half. Or you can replace your showerhead with an ultra-low-flow type.

Run your washing machine only when it’s full, or set the water level for the size of your load.

Consider installing an instant hot water heater on your sink.

Use a commercial car wash that recycles water.

If you have a swimming pool, consider installing a new water-saving pool filter.

A single back washing with a traditional sand filter uses 180 to 250 gallons of water.

Cover pools and spas when not in use to reduce evaporation of water.

For cooking and drinking, use bottled water in lieu of water from your tap.

At WattsControl, Inc., we care about the environment and the residents of Massachusetts, who are our friends and neighbors. We all need to do our part to conserve water.