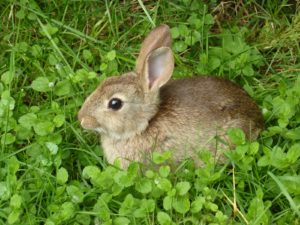 When I looked outside around dusk a few weeks ago, I observed an animal that I’ve never seen in my back yard before. It was a large groundhog, also known as a woodchuck and he was eating some birdseed and nuts that were on the ground underneath my birdfeeder. When I opened the door to get a closer look, he took off in a cloud of dust.

A variety of mammals can be observed out in the burbs. There are deer, rabbits, raccoons, moles, mice, voles, chipmunks, squirrels, coyotes, fishers, opossums, skunks, beavers and red foxes.

On any given night you may notice one or several of these animals foraging in your yard and shrubbery as they hunt for their dinner or just an evening snack.

During warmer seasons, rabbits will eat weeds, grasses, clover, wildflowers and flower and vegetable plants. When the weather turns cold, they will munch on twigs, buds, bark, conifer needles and any remaining green plants.

It’s important to teach your children that baby animals are to be looked at and not touched. Their mothers will provide for them, or if they’re old enough, they can survive on their own. Baby rabbits that are three weeks old and the size of a chipmunk are meant to be on their own. They know what to eat and when to hide. Don’t ever allow your child to pick up a baby animal or remove it from its environment because the animal will not survive.

There is also a risk of rabies. If a wild animal is acting passively, staggering as it walks, or is letting you get close to it, run away as fast as you can. The animal may have rabies and you definitely don’t want to get attacked or have to get rabies shots. Call your local animal control officer and/or the police and let them know about the animal.

Animals that you need to stay away from include coyotes, fishers and skunks. Do not go anywhere near coyotes or fishers if they’re in your backyard as they’re extremely dangerous and may attack you without any provocation. Skunks have interesting markings and look fairly harmless, but would spray you if they were cornered or felt threatened.

This is the time of year when wildlife flourishes. Everywhere you look, there are rabbits, chipmunks and squirrels. Please use caution when driving because animals don’t look both ways before crossing the street!

Motion activated floodlights or regular floodlights will allow you to keep an eye on the comings and goings of wildlife in your backyard. Call WattsControl, Inc. at 508-309-6631 for outdoor lighting installation or any electrical needs that you have.